Skip to content
You are here
Home > WVU Sports > Holton powers No. 9 WVU past Kansas State

MORGANTOWN, W.Va.–Jonathan Holton notched his second double-double in three games as No. 9 West Virginia defeated Kansas State 70-55 on Tuesday evening at the Coliseum.

“I thought Nate (Adrian) had the best game of his career,” WVU head coach Bob Huggins said. “He passed the ball. He kept the ball moving. His passes were good. Defensively, he was really good. He made some shots, but I think his floor game was very good.”

“Teyvon is getting better and better,” Huggins said. “You’ve got to give the kid credit. He comes in here as the leading scorer in all of junior college a year ago and he put himself in a really bad spot, he knows he did it and he knows he’s had to work his way out and to his credit, he’s trying.”

Justin Edwards was the only player in double-figure scoring for the Wildcats (12-8, 2-6). He had 11 points. Dean Wade added nine.

Kansas State shot 35 percent from the field and a lowly six percent from 3-point range. The Wildcats connected on 14-of-23 from the line.

Kansas State got as close as 41-34 in the second half after scoring seven consecutive points.

Tarik Phillip was whistled for a technical foul with 16:33 to play in the first half. Huggins was immediately issued another technical from the bench, but luckily for the Mountaineers, Kansas State missed 3-of-4.

After the technical fouls, WVU went on a 10-0 run. The Wildcats couldn’t buy a basket, missing nine straight. Paige drained a 3 with 11:20 to go to give the Mountaineers a 17-8 lead.

Jevon Carter drained a 3 with 13 seconds remaining to give the Mountaineers a 34-25 advantage at the half.

WVU swept the season series against the Wildcats.

Adrian made his first start of the season for Esa Ahmad, who was injured.

WVU’s bench outscored Kansas State’s 30-15.
The Mountaineers will travel to Gainesville on Saturday to take on the Florida Gators as part of the Big 12/SEC Challenge. 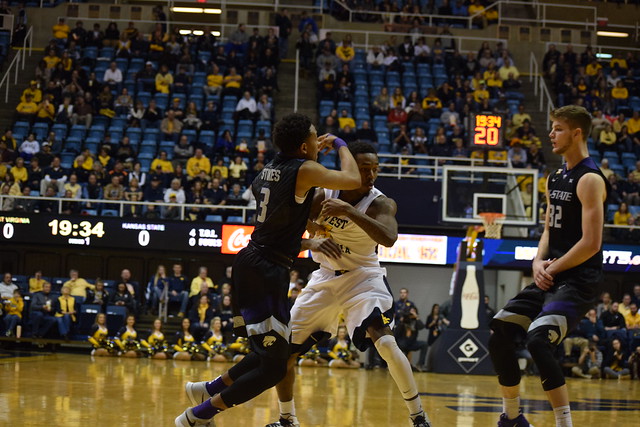