MORGANTOWN, W.Va.–Devin Williams is a man on a mission this season. The 6-foot-9, 255-pound junior recorded his fourth straight double-double in as many games as the West Virginia Mountaineers defeated the Bethune-Cookman Wildcats 97-44 on Monday at the Coliseum in the second game of the Continental Tire Las Vegas Invitational.

“The three bigs tonight had double-doubles,” Williams said. “That’s a plus. You can never have too many bigs grabbing double digit rebounds. So we did a good job of controlling the boards.”

The 53-point victory was the largest for WVU this season. The Mountaineers outrebounded the Wildcats 50 to 28.

WVU forced 30 turnovers and had 15 steals, but the Mountaineers gave the ball away 16 times.

“We have to get to the point where we finish better,” head coach Bob Huggins said. “We didn’t finish very well in the first half. We finished much better in the second half. There were too many balls knocked away from us. We left too many of them short. We have to continue to work and get better at that. We have to take advantage of that. We have to get more.

“The hard thing about playing the way that we have been playing is that you start to rely on it so much early in the season. We don’t play people that we are not going to be able to turn them over frequently. We are going to have to guard them at half court, and right now we are not very good at guarding at half court.”

Turnovers killed Bethune-Cookman in the first half.

After the Wildcats’ fifth turnover, Carter knocked down a shot from beyond-the-arc off the inbounds pass to put WVU up 8-0 with 17:29 to play in the half.

Miles gave the Mountaineers a 16-5 lead after stealing the ball away from Jordan Potts and scoring on a layup at the other end.

Josue Salaam had 12 points for the Wildcats.

The last WVU player to record four straight double-doubles was Carey Bailey in the 1967-68 season.

The Mountaineers were 21-0 last season when holding opponents to 69 points or less and this season they are 3-0.

WVU’s next game is on Thursday when the Mountaineers travel to Las Vegas to take on the Richmond Spiders in the next round of the Continental Tire Las Vegas Invitational. Tip-off is at 5 p.m. (ET) and the game will be televised on Fox Sports1.

The Spiders defeated Bethune-Cookman 89-64 on Saturday. 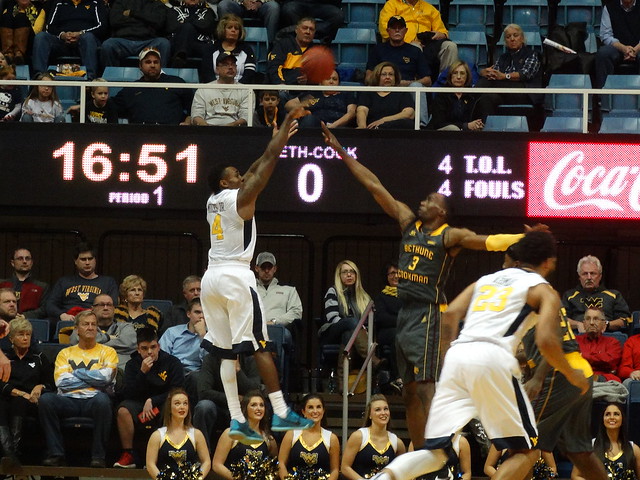